As Bridget Collins’ new book The Betrayals is released tomorrow, I thought that I would finally publish my review of The Binding which I wrote after reading the novel earlier in the year.

The Binding was gifted to me by my parents as my mum liked the cover of the hardback edition (yes, we all know the rule about book covers and judging) and, after a brief scan of the blurb, thought the novel would be something I would be interested in. As this was last year when I wasn’t back into the world of books, I probably would have missed this entirely if they hadn’t picked it up for me and I am thrilled that they did. I’m always a little worried when people buy books for me, especially ones that I have no knowledge of, but I had no reason to be worried of this one.

The novel is set in a world where books are dangerous and can contain more than just fiction. People visit book binders to get rid of their unwanted and unpleasant memories to help them move on and live their lives. The protagonist is Emmett Farmer who is summoned to become a book binder’s apprentice, as recent events have left him unable to keep up with his work on his family’s farm. By delving into the world of book binding Emmett learns some of the secrets kept within the society, as well as some of his own…

I had no idea what to expect from this novel but I know Collins still manage to surprise me several times throughout. I really liked the world that she had created and the premise was just so intriguing that I had to know what was going to happen. I have read novels on both memory loss and the idea that books are dangerous before, however intertwining those ideas was done wonderfully.

Emmett’s story is told in three parts, a structure which I think worked well for the story that Collins was telling. I liked that the reader gets to form their own relationships with the characters and questions on what’s really going on before the reveal in part two. This allows for more depth of the characters and just drew me to Emmett even more. I liked how he approached book binding differently from other, shadier, book binders. Seredith is a fantastic character who is so refreshing compared to other adults in the novel, I immediately loved her.

There’s one particular aspect of the novel, which I won’t spoil, that I really loved reading. It was an interesting surprise and gave the novel a whole other dimension. I’m pleased that, from what I’ve seen, there’s no direct mention of it as it’s as though you are discovering things as Emmett is. I thought that Collins captured the different family relationships well too it was fascinating to compare the world of the Farmers and the world of the Darnays.

View all posts by Rosie

3 thoughts on “The Binding by Bridget Collins” 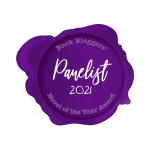 Blackwell's banners and bookshop.org UK buttons on this site contain affiliate links, this means that I make a small commission off every order made using the affiliate link at no extra cost to you.
%d bloggers like this: